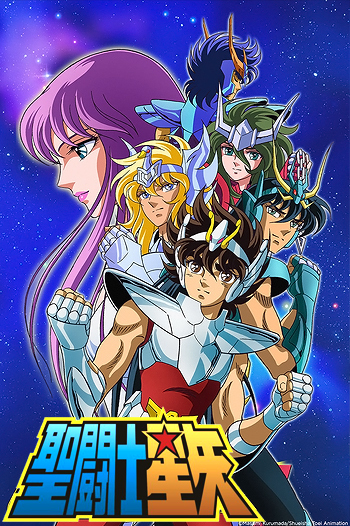 The Bronze Saints and Athena.
"Greek legend tells of the heroic Perseus, who severed the head of the monstruous Medusa. From the spilled blood sprang Pegasus, the magnificently winged sacred horse. Pegasus then took flight into the Heavens and became a constellation...
For sure, humans witnessed and became a part of the gods' wars. However, there were times Athena had to leave the battefield, so she left it in the care of brave, young men. There men came from all over the Earth, and were the epitome of true courage and power. They didn't use normal weapons, for their own bodies were weapons. Their fists were known to rend the Heavens and their kicks to crack the earth. The ages tell that wicked times would inevitably come again, and that the saints would be the warriors of hope."
Advertisement:

Saint Seiya began as a manga written by Masami Kurumada and soon became an anime produced by Toei Animation; it would become launcher of the "pretty boys in armor" subgenre of shonen fighting manga/anime (shows that followed it include Ronin Warriors, Legend of Heavenly Sphere Shurato, and even Mobile Suit Gundam Wing if you replace "armor" with "mecha". Symphogear is a Distaff Counterpart). It tells the story of five friends who serve the reincarnation of the goddess Athena, Saori Kido, in her quest to reclaim her place as ruler of the Saints, a group of warriors themed after the Western Zodiac and pretty much every charted constellation.

All saints receive a Cloth, a sculpture of their signature constellation that transforms into functional battle armor. There are three grades of Cloths: Bronze, Silver, and Gold with each grade being far more powerful and resilient than the last. Each armor is also an Empathic Weapon and has some amount of choice in who wears it and whether they deserve to use it, as well as at least one special property.

The five core cast members are:

The first arc is the Sanctuary Arc. Saori Kido, heiress to a vast empire, holds special games to see which among the bronze saints deserves the Sagittarius Gold Cloth: an armor so powerful it is considered to confer the power of a Weapon of Mass Destruction to its wearer. Seiya, Shiryu, Hyoga and Shun (among others) meet there to fight for it, but before the winner can be decided the Gold Cloth is stolen away by the Black Saints, renegade saints led by Ikki.

The story in the manga and anime differs considerably following Ikki's defeat, but it centers in the Bronze Saints facing several other saints sent by the Sanctuary with orders to kill them (and in the anime only, recover the Sagittarius Cloth helmet, the only part of the Cloth the good guys were able to keep). Midway through the battles against the Silver Saints, it is revealed that Saori is the reincarnation of Athena and leadership of Sanctuary is hers by right, which at the time is under control of the nefarious Pope (no, not that one), who wants her dead so he can claim her position as protector of the Earth. Eventually Saori and all the Bronze Saints decide to challenge the Pope directly, and travel to the Sanctuary. Due to some treachery, Athena/Saori is hit by an arrow powerful enough to fell a god in twelve hours... time which the Saints must use to defeat the other eleven Gold Saints and use the shield on the statue of Athena to save their goddess from death.

Later arcs tend to follow this form, with a series of fights to reach the offending god or mortal intent on bringing about a worldwide calamity while working under a time limit, failure leading to Athena's death or the destruction of the world. These arcs were Asgard, Poseidon, Hades, and Heaven. Both the last are ongoing.

Wishing to repeat their success with Sailor Moon, the series was licensed and dubbed in English as Knights of the Zodiac (which is actually the name the series has in most of the world outside Japan) by DIC Entertainment and shown on Cartoon Network, but the plot and characters didn't receive very good treatment. It wasn't very popular, and only 32 of the 40 dubbed episodes aired. ADV Films would later re-release the series on DVD with a new, much more faithful dub (note the page image), but they only had the license up to episode 60 due to it being the last episode that DiC had sub-licensed to them. In 2014, New Video Group released the complete Sanctuary arc in its subbed form, but even that flopped as well. Eventually, in October 2019, Netflix began streaming the series with a new English dub produced by Sentai Filmworks. This dub finally reached the end of the series in 2020.

However, outside the States it was IMMENSELY popular. In Latin America, in particular, Los Caballeros del Zodiaco/Os Cavaleiros do Zodí­aco has a raging Fandom up to this day, and the series is re-run constantly. Part of this is attributed to its phenomenal dub and respect for the source material. And in Europe it's no slouch either, especially France and Spain, where even to this day the manga sells by the crap loads.

Currently Masami Kurumada continues publication of his own sequel manga, Saint Seiya: Next Dimension, albeit at a very glaciar release schedule. Other author spin-off still being released include Saint Seiya: Meiō Iden - Dark Wing (an Isekai-themed series where a group of high-school students suddenly wake up in the world of Saint Seiya and take up Cloths and Surplices to battle in a new Holy War) and Saint Seiya Episode G Requiem. In the meantime, we recommend another of Kurumada's works, B't X.

The series has had several Video Game adaptations:

In Jump Festa 2011 a new movie was announced, originally planned to be released in 2013, Saint Seiya: Legend of Sanctuary, was released in June 2014, done in full 3D animation. Its theme song, Hero, is composed and performed by Yoshiki Hayashi as a part of Violet UK.

Discotek Media licensed the first four Saint Seiya movies and released them in Japanese with English subtitles (whether they'll release the fifth film remains to be seen), while Cinedigm released a new DVD-release of the original anime covering the entire Sanctuary Arc.

In Spring 2012, an anime spinoff, Saint Seiya Omega debuted, taking place twenty five years after the original. In Spring 2015, another anime spin-off, Saint Seiya: Soul of Gold, aired from April to September 2015, lasting 13 episodes. In the fall of 2017, Netflix announced that they would collaborate with Toei Animation in producing a CG remake of the original series directed by Yoshiharu Ashino called Saint Seiya: Knights of the Zodiac.

open/close all folders
0-D
E-H
I-L
M-P
R-V
W-Z
Within you is the ability to use the power of the creation of this universe! A true saint, who learns on his own, has the possibility to gain super-human abilities! There are more stars than people on Earth. You can use your Cosmo to make a Big Bang! Your fists can be like a meteor! A meteor!
Feedback

Alternative Title(s): Knights Of The Zodiac