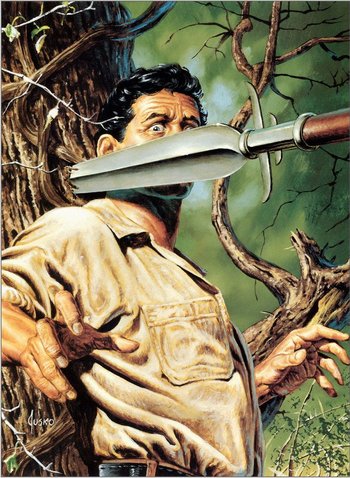 "You either have really good aim or really bad aim."
— Jack, Lost
Advertisement:

It's the middle ages. A group of bandits have tied up a fair maiden and there's no telling what they're about to do as they cackle evilly. Until an arrow zooms over head and embeds itself in a tree with a *twang*. The Cavalry has arrived.

A group of characters are hiding from a Serial Killer. They try to figure out their next move. They're scared but one poor soul says things can't get any worse. Uh-oh. A knife zooms by and hits that character in the chest. Enter the Psycho Knife Nut.

A band of samurai are walking through the woods when a shuriken flies past them and hits a tree. Oh no! NINJAS!

Get the point? Who needs a battle cry when a clean, well-timed launch of an arrow, throwing knife, or any other throwing implement into a nearby wall, tree, or person is a far more loud, efficient and stylish way of announcing your presence to your enemies? Sure, a sneak attack would be far more practical, but that's not nearly as cool. Let's also forget the fact that the character just wasted ammo, and that in the middle ages, arrows, especially the quality ones demanded by experienced archers, were somewhat expensive as well (unless of course the arrow buried itself into one of the enemy characters in which case it was quite the efficient move).

As the name implies, an exaggerated twangangangannng sound effect like a plastic ruler on a school desk often accompanies this, even if a dull thunk might be more realistic; The Coconut Effect and/or the Rule of Funny may be in play depending on how exaggerated the effect and how comical the scene.

See Blasting It Out of Their Hands for a subtrope which helpfully disarms the opponent, and Knife Outline if it pins their shirt to the wall. Compare *Click* Hello, the gun version of this trope, though there's obviously some overlap; there's nothing to stop a character achieving this trope with a warning shot from a firearm, or performing a Dramatic Crossbow Cock to save on bolts.