Pinned to the Wall 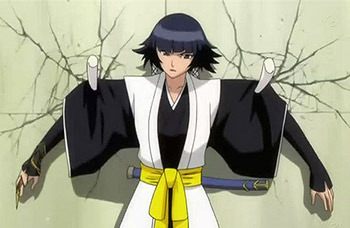 A character gets stuck to the wall, ground, or ceiling by a sharp, pointy object. Either the character is impaled (possibly With Extreme Prejudice) or their clothes are. Clothing Damage may occur for the latter, whether the character attempts to get free, falls due to gravity, etc.

The reasons for this are:

A Master Archer will use a nonlethal variant to incapacitate their opponents as a display of Improbable Aiming Skills. Shadow Pin is an Exaggerated version (popular with Ninja) where the attacker can pull this off without even touching their target. In modern shooter games, this is often an attribute of the crossbow-type weapons: if an enemy is standing next to a wall when they're killed with these weapons, their body remains pinned to it.

Arrows and throwing knives are the weapons most commonly used for this, but swords, spears or even horns can also work.

See also Knife Outline and Cape Snag. Not to be confused with Wall Bang Her, Wall Pin of Love, or Neck Lift. Giving Them the Strip may occur.

Colette explaining to Linguini that she is the toughest female chef around and that he needs to recognize her resilience before she trains him.

Colette explaining to Linguini that she is the toughest female chef around and that he needs to recognize her resilience before she trains him.