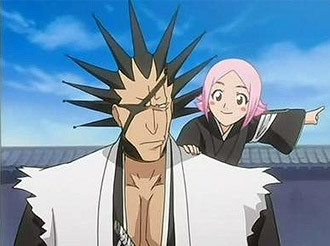 Kenpachi never goes anywhere without his Yachiru.
Too bad they have no idea where they are going...
"I always have to respect a man who knows the importance of a shoulder loli."
— Kenpachi Zaraki

, Bleach: Happy to Serve You
Advertisement:

Whenever someone carries a small kid, their speaking animal sidekick, or a very small friend on their shoulder wherever they go. Maybe it is to help the smaller one travel faster, or a sign that the two characters share a close (figurative or literal) familial bond. Not to be confused with Parrot Pet Position, which is about Loyal Animal Companions, rather than actual characters.