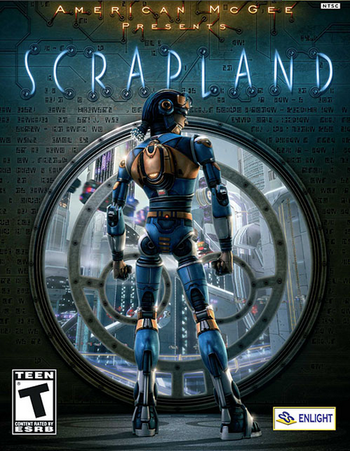 American McGee Presents Scrapland is a game made by American McGee, right after his more well-known work American McGee's Alice. It was first released on PC in November of 2004, and on the Xbox in 2005.
Advertisement:

In this game, you play as D-Tritus Debris, a literally self-made robot who has recently come to the planet Scrapland, and its capital city of Chimera. As soon as he arrives, his matrix is entered into The Great Database, a massive machine that revives any robot that dies, and is assigned a job as a reporter. No sooner does any of this happen than something unthinkable occurs. The Archbishop of Chimera is murdered... and his matrix has been removed from The Great Database, meaning he can't be revived. After this, D-Tritus is contacted by a mysterious robot, who knows that there's more to The Archbishop's murder than what is believed. From there, D-Tritus soon finds himself caught up in a huge conspiracy.

that MercurySteam, the studio which developed the original game, were remastering it for modern PCs. The remaster released on December 13, 2021.