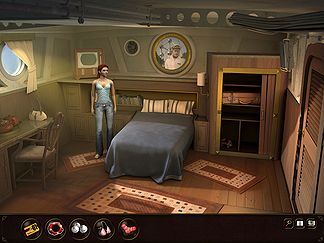 Secret Files is a series of Adventure Games developed by Fusionsphere Systems and published by Deep Silver, the video game department of the Koch Media group based in Germany. There are three games in the series.

The first game, Secret Files: Tunguska (named after the explosion caused in 1908 in Siberia) starts on March 27, 2006, with Nina Kalkenkov, an average Russian woman, visiting her father, Vladimir, at his office in a Berlin museum only to find him missing and his office a wreck. The police being singularly unhelpful, she tackles the problem herself, aided by one of her father's co-workers, and later boyfriend, Max Gruber. The two uncover an investigation he undertook to Tunguska in the 1950's, as well as a world domination scheme that's also interested in the same investigation.

The second game, Puritas Cortis, taking place shortly after the first, begins with several members of the Catholic church, a vicar and then a bishop, being attacked and murdered over a strange parchment found while the vicar's church was undergoing renovation, referring to a prophet named Zandona, known for his gloom-and-doom prophecies. Meanwhile, Nina and Max have split up. Nina is taking a cruise to relax, while Max is headed to Indonesia to visit a former classmate, Sam Peters, at her dig site where she's uncovered an ancient temple. Both of them end up involved in thwarting an Ancient Conspiracy and their plan to create natural disasters to manipulate Zandona's prophecies.

The third game is simply titled Secret Files 3. Nina and Max have gotten back together, and are planning to be married. However, before this happens, Max is taken by the police under charges of suspected terrorism. As it turns out, these men are not the actual police, and Nina finds herself embroiled in a plot to save him, and the world, yet again.

The game's approach resolves around solving puzzles and combining items to achieve the desired results. One may have a puzzle, like a very large, multi-colored symbol one must determine the smaller symbols that make it up, and can tell by changing the color of a lamp by tinting it with other inventory objects, as well as different puzzles and riddles to solve.