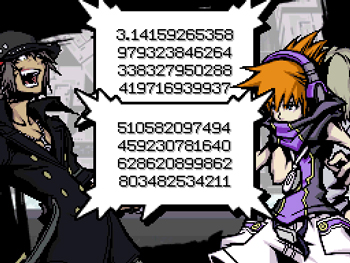 "The world's made up of numbers!"note Pictured: 96 digits recited. Tapping the screen at this point produces another speech bubble containing 60 more for a total of 156 digits.
"I could go to Vegas. Learn to play Black Jack. Memorize four hundred fifty-two consecutive digits of pi, a few hundred measly cards are easy."
— Fred, Angel
Advertisement:

to an absurd number of places. With its endless parade of decimal digits, π has both mystique and geek cred — it has its own holiday

, it's splashed across mugs and T-shirts, calculating 1–10 millions of digits of π is a very common way of testing your CPU's power, and it's honored by movies and songs

. Most of us never memorize it past a few places, so anyone who can fire off a hundred surely must be a genius, right?

For the record, odds are that your computer "knows" pi to the nearest multiple of 2-52, about 2.168×10-15, so about fifteen reliable digits. Ditto for e. You can compute it much more precisely, but you'll need to make your own storage.

The truth is, only a handful of digits are needed for most applications — only 11 decimal places are needed to calculate the circumference of the Earth to a millimeternote And due to the effects of General Relativity, you would get the wrong answer anyway, while only 42 are needed to find the circumference of a circle the size of the entire universe to within less than the diameter of a single proton. There's not much point in memorizing a hundred places other than to show off. (And indeed, after that many digits you can use whatever wrong digits you want because the math will still be pretty darn close — though you'll have a lot of mathematicians gritting their teeth…) For obvious reasons, this is a go-to Overly Long Gag. For reference, here's a handy guide

On the other hand, some people really do just enjoy the challenge of memorization, the same way a theater geek might memorize scenes from Shakespeare or a Trekker entire scenes from their favorite episode, and they do it for personal satisfaction rather than any desire to show up anyone else; any feelings of inadequacy are the responsibility of those who feel them, not the math geek's.

Perhaps the reason Reed Richards Is Useless is because he spends his time memorizing numbers he'll never use. It's also a common attribute of the Absent-Minded Professor and the TV Genius, as the contrast is a wonderful thing to show or rant about.

Inversely, a quick way to show that a character is stupid is to have him not know what pi is at all: "Apple or cherry?"

College Humor rocks out an ode to the fullness of Pi (in the tune of "Sweet Cherry Pie"). The full clip is over 13 minutes long.

Alternative Title(s): A Mouthful Of Pi

College Humor rocks out an ode to the fullness of Pi (in the tune of "Sweet Cherry Pie"). The full clip is over 13 minutes long.