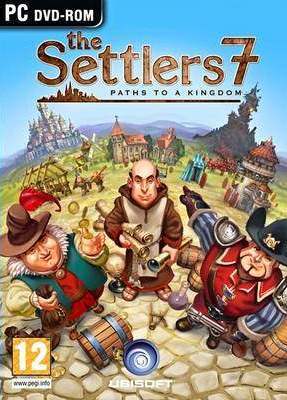 The Settlers is a series of RTS/empire-building computer games from Blue Byte Software, which premiered on the Amiga in 1993. The series was first conceived by German developer Volker Wertich, who designed the first game as well as returning to work on the third installment. He was not directly involved in the creation of the other titles, but in 2018, Ubisoft (who purchased Blue Byte back in 2001 and acted as publisher ever since) announced that Wertich was leading the development of a new title in the series, set to release in 2020.

Missions in the game start with each player controlling a castle, the immediate area around it, and some basic resources like wood and stone in storage. Players use these resources to build basic structures for gathering more wood and stone to make more buildings. These extra resources are used for construction of guard huts, which expand your territory, in turn opening up more space for construction of more buildings—especially ones that produce other basic materials like raw minerals (iron, gold, coal). Yet more buildings are then erected to grow or forage for food to feed miners, process raw minerals into tools for your workers and weapons for soldiers, brew beer to make everyone happy, and so forth. The eventual goal is to expand your territory enough to establish borders with your opponents, then assault their guard posts to steal away their territory, eventually bringing down their main castle.

Space within your territory is limited, and some structures take up a lot of space, so the decision to place a structure in a specific spot can have a great impact. In addition, smart placement of roads to connect these buildings can dramatically cut down on the time it takes for resources to travel from their production sites to their processing sites and storage facilities, and failure to cut down travel times means losing the advantage. This makes the series unique among RTS games: it focuses on logistics and resource management rather than simple military might. In fact, in the first game, it was often possible to win a level without any meaningful military engagement, as the AI would tend to eventually run its economy into the ground.

A second unique quality is its "high-level management" style of play, which eschewed a traditional Command & Conquer Economy in favour of a system where the player decided what buildings were to be built, what enemy structures attacked and what the transport priorities for various commodities should be, and the peasants carried out those orders to the best of their abilities. You do not have any direct control over any of your settlers.

Games In The Series Include

The first two games are slow as molasses. Starting wood production, for instance, means designating a spot for a woodcutter's hut and hooking it up to a road. A leveler will then walk over from the headquarters and prepare the ground. A builder will then walk over and add planks to the hut as a bucket chain of carriers brings them in. Once the builder's done, a woodcutter will walk over to occupy the hut, walk over to a nearby tree, cut it down (then strip off the branches in the first game), carry it back and leave it in front of the hut. Carriers will bring it over to a sawmill, which will turn it into one unit of planks, fresh and usable once the carriers get it where it needs to go. Matches will take hours. The games will frustrate sane people (one review in an Amiga magazine provided a recipe for a tuna melt, so that players would have something to do while they waited for their orders to be carried out) but have a strong cult following, especially in their native Germany.

The third and fourth game take a different approach. While the basic principles remain the same, roads are no longer placed manually, now appearing on any path settlers frequently use and speeding them up. Maps are no longer tile-based, allowing for more precise placement of buildings. Additionally, soldiers and specialists can be moved freely and emphasis is shifted from individual soldiers fighting duels to skirmishes and battles between larger armies.

Heritage of Kings dropped the quirky, adorable presentation in favor of more realistic looking Settlers. Territory is no longer limited by borders and more emphasis was placed on a story-driven campaign centered around a young prince reclaiming the kingdom once ruled by his father. Hero units with special abilities also become important to combat, and research is introduced to the series. The economy, on the other hand, is simplified - there are only five resources, as well as money, which are stored in pools and no longer need to be refined, thus removing the production chains from the predecessors.

See also Knights and Merchants, a game made by a bunch of Blue Byte people who left the company following the second game with a lot of similar mechanics.

Not to be confused with the board game Settlers of Catan.

The seven mainline titles were re-released as part of a "History Collection" in November 2018, featuring additional features such as support for higher resolutions and more recent operating systems (getting the third game to run on current systems required some tinkering before, and running the first two games required an emulator or a separate (virtual) system). Reception varied depending on the game, with some actually gaining new bugs in the process, and eventually, it became clear that the rerelease had been handled by individual developers who were not familiar with the inner workings of the games.The rerelease did, however, include some previously rare or restricted content. Notably, the Community Pack (released after the game's Gold Edition and not included in any of them, leading to some absurd used sale prices) and The New World (not included in some of the Gold Editions) expansions for the fourth game, previously only available in Germany, are included.The Settlers II 10th Anniversary as well as Rise of Cultures are not a part of this collection.

This series embodies the following tropes: