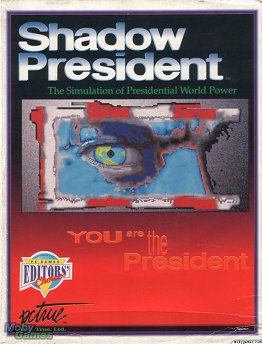 The "Simulation" of Presidential World Power. (Without the checks and balances to worry about).
"I hope you know what you're doing..."
Advertisement:

Shadow President is a MS-DOS "Geopolitical Simulation" game, released in 1994, designed by Robert Antonick and Brad Stock. The game's scenario is based loosely around the early 1990's and the Cold War. Also, the Iraqi invasion of Kuwait is another scenario included in the game that runs parallel to the main Cold War scenario. The game is somewhat like a graphical text adventure.

In the game, you play as the President of the United States of America and start off with your popularity at 50%, and part of the game is maintaining your popularity so that you can be reelected and therefore "win" the game. The game has a variety of statistics for each region, such as the "quality of life", the average income per person, the populations' primary concerns, and much more. (Not being reelected is effectively "game over".)

To make a long story short, some of your options/objectives are to maintain the budget of the United States, deal with diplomatic crises, send foreign aid optimally, and fight wars as necessary. Of course, you don't have to be benevolent if you don't feel like it and can try your hand at expansionism, such as attempting a take-over of the Americas, or drop some nukes on a few countries, but beware of your approval rating dropping too far or you likely will be impeached or even assassinated.

Received a sequel in 1996, named CyberJudas, which added more game modes and themes of espionage and treason to the formula.

Thank you, God bless you, and God bless the United States of America.