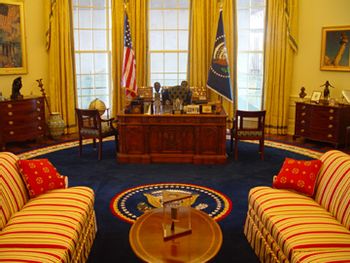 Nobody behind the Resolute Desk? He's there. You just can't see him.
"Well, who did you expect to see — the President?"
— Droopy Dog, in the theatrical cartoon Droopy's Good Deed
Advertisement:

Whenever a scene calls for the President, but the show is meant to be set "in the real world" (and thus, a fictional president is undesirable, and an impersonator wouldn't be sufficiently convincing), the President is generally implemented as He Who Must Not Be Seen, especially The Faceless. If the President is vague to the point that even the President’s name is never said, this is done to keep the show from being dated once the president’s term is over (think of how Bart and Lisa Simpson were the same age from George H.W. Bush's presidency onward). The transatlantic counterpart would be the appearance of the outstretched hand of the Monarch or Prime Minister, unseen on the other side of the door.

To a certain degree, this also keeps the work from getting unintentionally political; putting controversial real-life politicians in your story is risky business, doubly so if the in-story president is specifically depicted in a positive or negative light. Compare the Chrysanthemum taboo

on depictions of The Emperor of Japan in Japanese media.

See also No Party Given. For celebs that are neither politicians nor actors, see Invisible Celebrity Guest.

Note: this is only for when the political leader is supposed to be a real historical person — FDR, Margaret Thatcher, whoever. If the leader is a fictional character, it's one of the other tropes for never-seen characters, like He Who Must Not Be Seen, The Faceless, or The Ghost. Contrast No Celebrities Were Harmed.