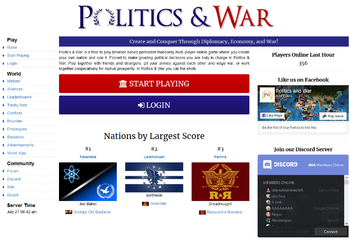 is a browser-based nation simulation in the likes of Cyber Nations and NationStates.
Advertisement:

Although on the surface the game may appear to be a Cyber Nations clone, the game differentiates itself with several gameplay improvements, and more complex gameplay. These include a resource collection system in the style of traditional RTS games, a more turn-based oriented war system with military points, and more in-depth nation building with individual cities. However, in many way the game is still somewhat similar to Cyber Nations. But, as many players can vouch (as some of them have also played Cyber Nations), this is not a bad thing.

The game itself was released around late October in 2013. Initially, most of the players came from other nation sim games: Pixel Nations, Project Terra, and Cyber Nations. The game continues to receive a constant influx of players from those aforementioned games - many of whom they also brings along their alliances with them.

Tropes in Politics and War: