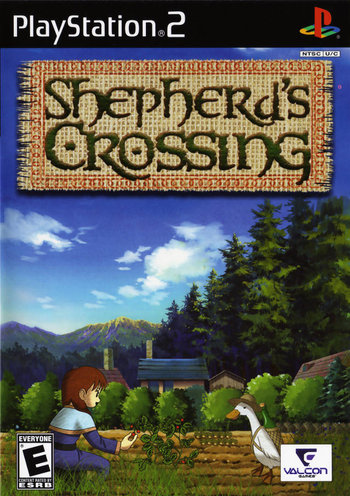 In both games, you play as a young person (young man in the first game, young man or woman in the second) who has recently moved to Shepherd's Crossing, a tiny village high in the mountains. You have come because you've been offered free land... as long as you develop it into a farm and become a part of the community. As its name suggests, Shepherd's Crossing is known for its sheep, and raising a thriving flock will truly make you a part of the village. But you can't just expect the locals to start selling you precious sheep right away! You'll need to work your way up by raising other livestock first, as well as planting crops and gathering other materials.

This series has a higher focus on animal husbandry than other Farm Life Sim games. You'll raise large flocks of livestock, from small animals like marmots and rabbits to poultry like ducks and geese to large animals like goats and yaks (and, of course, sheep). You'll need to grow hay to feed your larger animals, while your smaller animals can feed on scraps left over from your farming. You can breed livestock with different colors to fill out your Diary. You can also butcher livestock for meat, to feed carnivorous animals like dogs and ferrets, and for pelts. In both games, you unlock the next tier of livestock by showing you can successfully raise one particular animal. Of course, you can still grow crops, and some of them are essential for feeding your flocks.

In Shepherd's Crossing the first, there is no money. Instead, the entire game works on a barter system, with certain items being able to be traded for others. You start off with only a field full of Grass, which you'll have to turn into Hay. But you can trade Hay for your first animals, Marmots... and from there, everything else. You'll need to trade your way through the market up to the sheep you so desire. Somewhat unusually for a sim game, there is no In-Universe Game Clock—you can Take Your Time to do whatever you need, as the days only advance when you decide they do.

Alongside your livestock, you can raise dogs (and a few other animals) to hunt. Hunting takes the form of a turn-based battle system where you use the abilities of your dogs to hunt game. You can collect skills such as digging in holes and nipping at heels, teach them to your hunting partners, and use them to take down foes ranging from feral chickens to dangerous lynxes and bears. Hunting can get you useful items, such as meat and pelts, but it can also get you the game's only currency—Hunting Points. You can trade Hunting Points for more skills, useful farm items, and decorations to make your farm lively.

Shepherd's Crossing 2 is more traditional. The game has a more traditional marketplace where you buy and sell things with conventional currency. Instead of an In-Universe Game Clock, the game uses a system wherein every action you do takes up a certain amount of time. Planting seeds takes a small amount of time, while chopping down a tree takes longer, for example. When you've used up a full day's worth of time, the clock advances. The game becomes more about managing the amount of time you have available with your actions. You can no longer go hunting, but the game has a greater focus on Item Crafting to compensate.

You are not just farming for wealth in the sequel, but sustenance, as well. You must keep stockpiles of various kinds of food, as well as firewood, to survive. If you run out of supplies, it's Game Over! However, this means you can now cook as well, and you can fill your belly with delicious dishes such as apple pie, bread bowl soup, and homemade ham. You can also give dishes to your fellow villagers, who have an expanded role in this game. You can even get married, but you must fulfill the marriage customs of Shephard's Crossing to do so! Men must present their intendeds with a flock of healthy, full-grown sheep, while women must knit their beaus handmade blankets.