Mission Control Is Off Its Meds 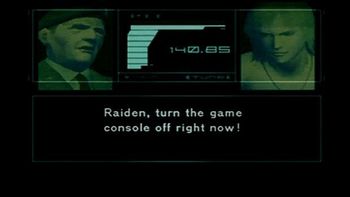 Um, colonel, you okay there?
The Mesmer can open the jawlike recess in its protective outer shell in order to [ERROR463] share its beauty... Do not resist...

You probably shouldn't bother editing this page. Rest assured, there are thousands of others who will probably patch up the article before you. After all, don't you have an essay to write, or a girlfriend to date? No, probably not, because you are a very sorry excuse for a human being indeed. It is a common statistic that TV Tropes will rarely enhance your knowledge, and will eventually decrease your knowledge. Or, better yet, hand us some scissors, so we can end your pitiful existence for you?

Mission Control has been acting strangely. It's acting like it can't make up its mind whether it loves you or hates you. It gives you orders which, if followed, get you brutally killed. It taunts, belittles, and lies to you. What's going on? Why is this happening? As it turns out, Mission Control is off its meds.

These types sometimes offer rewards that never materialize. Others bring you so far only to inform you that You Have Outlived Your Usefulness.

It comes in two main forms:

This trope covers any subject that could be Mission Control, but is clearly insane, clearly evil, or otherwise not nearly as good at aiding the character as it should be. Compare Treacherous Quest Giver, where the person giving you directions does not have your best interests at heart; Annoying Video Game Helper, which is annoying or unhelpful, but not intentionally so. When used in video games, Mission Control Is Off Its Meds can be considered a variant of Unreliable Narrator or Lemony Narrator. More extreme and surreal variants (such as the page quote) can dip into Word-Salad Horror.