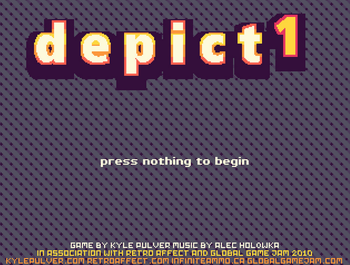 "You're not listening to me. Don't you trust me?"
Advertisement:

is a somewhat bizarre Flash platformer about trust and deception, as well as themes of safety and confinement versus risk and freedom.

You play as a Heroic Mime who escapes from some sort of prison with the help of a mysterious benefactor who talks to him/her via a radio. However, the advisor does not seem to be entirely trustworthy, and their "advice" gets stranger and stranger as time goes on. Can the main character really trust their "friend", or will following their advice lead to ruin?

Another notable feature of the game is that it creatively subverts many standard mechanics of platformers in ways that are best experienced for yourself. It is worth giving a try, especially if you are a fan of "philosophical" puzzle platformers such as The Company of Myself.

It was Newgrounds Game of the Year for 2010.

For a similar experience from the same creators, play Verge.

Note: Many of the tropes below may spoil the game for you. Even figuring out the basic gameplay mechanics is an essential part of the experience.

Decide for yourself whether or not to trust these tropes: