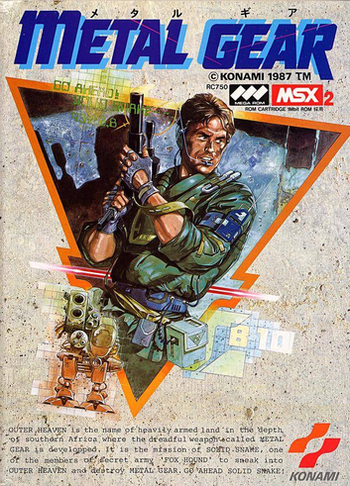 This is Solid Snake! Your reply please...
"OUTER HEAVEN is the name of heavily armed land in the depth of southern Africa where the dreadful weapon called METAL GEAR is developed. It is the mission of SOLID SNAKE, one of the members of secret army 'FOX HOUND' to sneak into OUTER HEAVEN and destroy METAL GEAR. GO AHEAD SOLID SNAKE!"
— Official plot synopsis from the MSX2 and Famicom versions.
Advertisement:

Released in 1987 for the MSX2 computer platform in Japan and Europe, the first game in the Metal Gear series is considered to be one of the earliest examples of the stealth action game genre.note Although Castle Wolfenstein for DOS predates Metal Gear by a good six years. It marked the debut of the now world-renowned Hideo Kojima.

The game came into existence when Kojima's superiors, noticing the success of overhead military shooters in the arcade such as Commando and Ikari Warriors, asked him to create one for the MSX2. However, Kojima quickly discovered that a fast-paced shooter would be impossible on the MSX2, thanks to the system's own hardware limitations that limited the number of sprites that could be grouped together on the same horizontal plane before the sprites would start flickering (a hardware limitation that the MSX2 shared with the Nintendo Entertainment System, and which many old-school NES players are familiar with). Kojima decided to retool the game around avoiding combat instead, designing the play mechanics around stealth and infiltration.

The player controls Solid Snake, a rookie member of special forces group FOXHOUND, who is sent on a mission to infiltrate the fortified state of Outer Heaven and destroy their top secret weapon Metal Gear, a walking tank capable of launching nuclear missiles from any angle. The game's story is mainly remembered for the plot twist near the end that would serve as the foundation for future games in the series.

Konami also produced an NES version, which was developed without the involvement of the original team (which led to Kojima disowning the NES version in later years). While the plot is the same, the NES version, due to some of the NES' own hardware limitations, lost a few gameplay elements that affected the overall difficulty: enemy guards no longer drop rations or ammo when they're punched to death, there's no invincibility window when the player sustains damage (allowing enemies to easily bull-rush the player to death in early stages), checkpoints are now based on the player's rank rather the current location, the higher alert mode was removed, (making it easier for players to escape from enemy guards by simply moving to the next screen), and enemy reinforcements now come in single file.

The NES version also replaced a couple of the bosses: namely the actual Metal Gear itself was replaced by a Super Computer that Snake must destroy in its place. The level layout was also changed drastically: Snake begins his mission in a jungle prior to reaching the first base, the enemy transport trucks are now used as a means of getting around (due to the aforementioned lack of checkpoints) instead of setbacks, and the basement floor that connected the first two bases is now a separate building. The soundtrack of the NES version is a mix between rearranged music from the MSX2 version and new themes.

For many years, the NES version of Metal Gear was the only version of the game officially available in North America, since the MSX format was never commercialized in that region. The NES version sold surprisingly well in the U.S. despite the changes made, as players at the time were unaware of the original version. In fact, it was so successful that Konami ended up commissioning the development of a sequel aimed at the NES marked in the west, called Snake's Revenge, which was developed without Kojima's involvement. Kojima would eventually learn of the game from one his colleagues who was working on the development team, something which inspired him to immediately begin work on an authorized sequel for the MSX2, Metal Gear 2: Solid Snake.

In late 2021, the original game, specifically the Subsistence release, was re-released

The MSX2 version provides examples of:

The Famicom/NES version provides examples of: