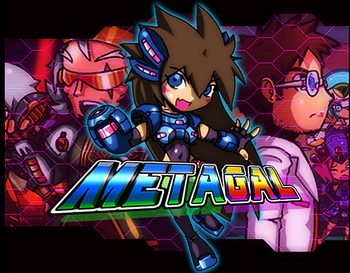 METAGAL is a Mega Man-like Platform Game by Retro Revolution.

From there, Meta embarks on a mission to face her sisters, free them and Dr. Ray, and stop General Ripper from taking over the world.

Not to be confused with a girl expressing the Meta Guy trope or the videogame Gal Metal.