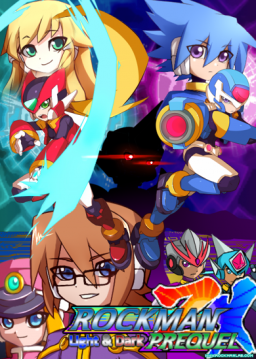 , set between the events of the Mega Man Zero and Mega Man ZX series. Unlike the ZX series, there are only two playable Biometals. Like Mega Man X4, players can choose between two characters, Nett and Elf. Nett uses Model X, while Elf uses Model Z. Both players can obtain EX skills after defeating bosses. Nett can change the property of his second charge shot while Elf can use special commands to perform various techniques.

The game may be downloaded here.

A sequel to the prequel, Rockman ZX Zeta, is in the works. It focuses on Girouette and a new character, Cynthia, who meet and gain Biometal Model Z. The Biometal acts as the base for Double Megamerge forms, rather than in ZX, which has Model X as the base. Hyperion and Erebus also return as major antagonists. Plans for a complete release once development ends extend to 2022.