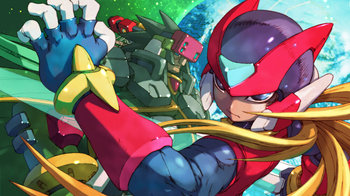 Mega Man Zero 4 is a video game created by Capcom and Inti Creates for the Game Boy Advance in 2005. It's the fourth and final installment in the Mega Man Zero series.

Dr. Weil still rules over Neo Arcadia with an iron fist. This forces Neo Arcadians to flee their homes and try to establish a new colony in the wastelands, finding New Eden Area Zero (the crash site of the Eurasia colony from Mega Man X5). Zero learns of Operation Ragnarok, a military campaign where Weil plans to obliterate all inhabitable places like Area Zero so that humans would stop running away from Neo Arcadia, and decides to thwart Weil's evil plans.

The game introduces the Zero Knuckle, a weapon that lets Zero steal other enemies' weapons and use them for himself, as well as a new mechanic where Zero can alter weather conditions before entering one of the eight main levels.