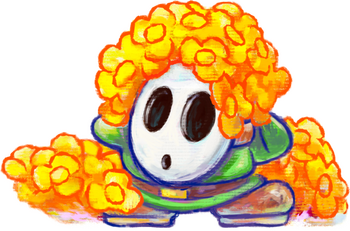 Mooks come in all sizes and varieties, from large to small, regular to elite, and can come from all walks of life.

But one variety of Mook is often unseen. Stealth Mooks are essentially mooks that have some form of stealth ability. The extent and nature of this ability can range from simply blending into their environment really well to being absolutely undetectable until they fire at you, and be a result of magic, technology, good use of the terrain, or anything else. Oftentimes, you'll need a special tactic/item/etc to deal with this kind of mook.

Any kind of Mook can be a stealth Mook, so there is plenty of overlap with other Mook types. A Lightning Bruiser Elite Mook in a video game can be combined with Stealth Mook to make Demonic Spiders, while a weak person that's merely hard to find may count as Goddamned Bats.

Very likely to be a Ninja of sort, and it is very common in video games. Please be aware that stealth must be an integral part of what the Mook is: a regular Mook using Geo Effects on one occasion to remain unseen is not this trope, but a Mook who does it all the time would be.

In addition, the Mook doesn't even have to fight for an example to count; an unarmed scout would readily fall under this as long as they consistently try to remain hidden.

Supertrope to Ambushing Enemy, which hides out of sight until its target draws near it. Compare The Sneaky Guy. Contrast with Patrolling Mook, whose job is to detect enemies, not stay hidden from them. Compare Invisible Monsters who don't have to be sneaky to be hard to detect.

These ghosts spend most of their time invisible, only becoming visible to scare Luigi or attack him.

These ghosts spend most of their time invisible, only becoming visible to scare Luigi or attack him.