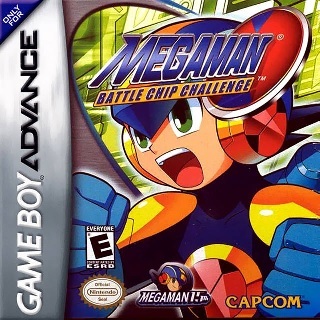 Mega Man Battle Chip Challenge is a 2003 spinoff of the Mega Man Battle Network series released simultaneously for the Game Boy Advance and WonderSwan Color (as Rockman.EXE N1 Battle, and much like the WonderSwan itself, it was Japan-exclusive), and an oddball at that. Its whole Excuse Plot is centered around tournaments, and there is no exploration or virus battles. Netbattles are a turn-based affair the player has little input on.

Up to 10 battlechips must be equipped on a triangular deck pattern. During battles, chip sequences are chosen at random and played automatically. The player must learn how offensive and defensive skills play off each other to maximize their winning chances.