Are These Wires Important? 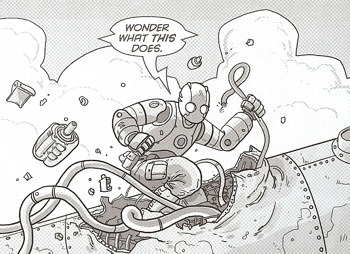 Oh, you're going to have to take this in to the shop!
"This looks important!" [yoink]
— Iron Man, Iron Man
Advertisement:

There are many ways to stop a rampaging robot, a spider-tank, or even a huge mecha. Missiles, More Dakka, or perhaps even another rampaging robot, spider-tank, or mecha! But the method that is most enjoyable, from a heroic perspective, is tearing a hole in the machine's armor, reaching an arm in, and simply yanking wires and components out until it stops moving.

The destructive opposite of Percussive Maintenance. For one wire in particular, see Cut the Juice. For wires that need to be dealt with in a particular order, see Wire Dilemma. Contrast What Does This Button Do?, where the character is poking at the works out of curiosity rather than destructive intent.