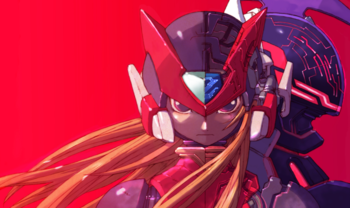 Mega Man Zero 3 is a video game created by Capcom and Inti Creates for the Game Boy Advance in 2004, the third installment in the Mega Man Zero series.

Two months after the previous game, a spaceship emitting energy similar to the Dark Elf has crashed. Both Neo Arcadia and the Resistance set off to investigate, only for them to meet a powerful Reploid, Omega, and its mysterious creator, Dr. Weil. Dr. Weil is a war criminal from a hundred years ago, but he was absolved of his crimes by none other than a resurrected Copy-X. Copy-X resumes command of Neo Arcadia, relieving Harpuia and the other Guardians of their duty, and instates Dr. Weil as his new military advisor. Dr. Weil then challenges the Resistance (and Zero specifically) to a race on who gets to the Dark Elf first.