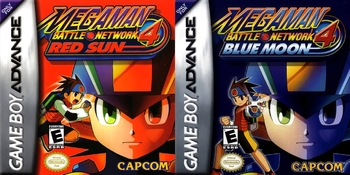 Five months after the previous game, Lan now goes to 6th grade, but evil is still on the loose, as a new threat lurks to cause chaos, so Lan and MegaMan.EXE must defeat it. At the same time, they participate in multiple NetBattle tournaments, all the while an asteroid is quickly heading to Earth.

Battle Network 4 is unique in the series for its structure. The three tournaments Lan and MegaMan enter have semi-randomized opponents, with each one having their own small story scenario between matches. This makes each playthrough different and encourages entering New Game+ (also unique to this game) twice to see everything and achieve 100% Completion.

Additionally, the big new gameplay mechanic in this entry is Double Soul, replacing Style Change. By sacrificing a battle chip, MegaMan takes on the abilities of another Navi he's resonated with for three turns. Double Soul replaces the Mega Buster's charge shot and provides other abilities, such as boosting damage for specific battle chips. There are six Double Souls in each version and only three can be obtained in the first run, making the mechanic the biggest motivator for replaying the game.