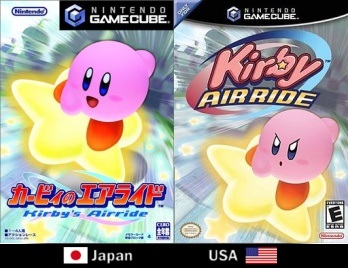 American Kirby is definitely in it to win it.
"Being happy is sometimes rather pleasant, really. Japanese developers understand this mysterious truth, but while they keep trying to export their eternally sunny characters to us, we just keep transforming them into gloomy, moody tough guys."
— "Why Japanese Boxart is Better,"

When a Japanese game is released Stateside, there's a tendency to make the box art, or even the character models, a little more hardcore. Maybe it's as simple as adding Angry Eyebrows, or maybe the character's model is completely redone. This is often done to characters who were originally intended to be cute. Sometimes this trope goes the other way, too: an American character may be made cuter for the Japanese release.

This has to do with Values Dissonance and, to a lesser extent, Americans Hate Tingle. The Japanese culture, in general, is very accepting of cuteness anyplace, and will take it in stride. In comparison, the American culture, while not having any animosity towards it nowadays as they did back then, often tends to associate the bright, colorful, and innocent with childhood and immaturity, and generally has more of a preference towards works that are manly and edgy, or whatever that will make them look more mature and adult (and according to their culture, that usually translates to macho manliness or the feeling to crush all oppositions). In fact, for most of the 1990s and throughout the 2000s, Americans used to have a very low tolerance towards cuteness in any media that wasn't explicitly kid-oriented, which is in stark contrast to Japan. In the case of the 90s, it was a cultural pushback against sanitized media of previous decades. And as for the 2000s, The War on Terror and Columbine Shootings left many in the United States confused, angry and traumatized, and many teenagers of the time were into violent and sexual media. Even Otaku resonated strongly with edgy and dark Anime like Neon Genesis Evangelion, Death Note, and Elfen Lied.

This started to change in The New '10s due to a general pushback against the Darker and Edgier trends of the previous decades (despite the popularity of some grimdark TV-MA-rated shows on premium cable during the 2010s) without any intervention from Media Watchdog organizations nor from Moral Guardians, and cuteness in general is far more loved and accepted in the United States than it used to be in the past (it's hard to visit any supermarket these days without seeing a Minion's face on something, or merchandises from Adventure Time, The Amazing World of Gumball, We Bare Bears, or My Little Pony: Friendship Is Magic).

In the past, American culture's former attitudes against cuteness used to go so far as to color their perceptions of Japanese culture; some historians had occasionally (and controversially) attempted to link Kawaisa to the national humiliation endured by Japan in World War II and the nation's resulting 180° turn from a warrior culture to a pacifistic one. And speaking of color, pink is a value-neutral color in modern Japan, to the point where there are even pink gas stations. In the US, bright pink tends to be associated with young or adolescent girls, so most ostentatiously pink cover images (and other objects) are toned down drastically. And as an added bonus, if the game is ever brought out to Europe, expect the artwork cover to be more artistic than usual regardless of whether or not the buyer can make sense of the artwork.

This trope is one reason why GameFAQs has a separate tag for box shots, since sometimes it just happens that the box art of the games differs.

A subtrope of Cultural Translation and related to Darker and Edgier. It's also not always a bad thing, mind you; if the game itself isn't particularly cutesy, then giving it cute box art is just weird. It can also mean that a game with cute art direction may hide a heart of blackened steel underneath that gamers might miss out on. On the other hand, if you're thinking about buying a game whose main character is an adorable pink puffball surrounded by sparkles and rainbows, then whether or not he's smiling on the cover honestly shouldn't be a deal-breaker (though it's perfectly normal if you're wondering why he isn't smiling).

See also Mascot with Attitude, since many examples are an attempt to turn a character into one of these.

Note: Weblinks Are Not Examples! Please include a description of the cover art in your examples.

Nelvana made Cardcaptor Sakura, a cutesy shojo series, into an action-packed show for the North American market.

Nelvana made Cardcaptor Sakura, a cutesy shojo series, into an action-packed show for the North American market.