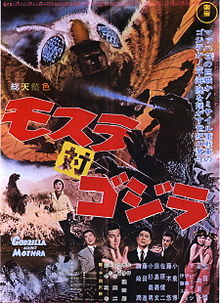 The bug got top billing, but we know who the real star is.
"Are you going to allow innocent men to die alongside guilty men? You have no right to decide that! That right is sacred!"
— Junko, in the English version.
Advertisement:

The fourth film in the Godzilla franchise, Mothra vs. Godzilla (initially released in the states as Godzilla vs. The Thing) marked a brief snap-back in the franchise. While the previous film went on to become the highest grossing entry of all time, it was more of an action adventure film with some comedic touches more prominent in the Japanese version. Mothra vs. Godzilla brings back a scarier, antagonistic Godzilla, who terrorizes Japan, with the only hope being another Toho superstar: Mothra. Known as Mosura tai Gojira in Japan.

It is the first movie in the franchise to have been brought overseas to the U.S. without excessive re-editing, remaining mostly intact other than a few cuts here and there and the obvious title change, in addition to the inclusion a scene cut from the Japanese release, intended only for export.

The film also marked actor Akira Takarada's first return to the franchise since the orignal Godzilla (1954). He would later appear in Invasion of Astro-Monster, Ebirah, Horror of the Deep, the film's '90s remake, and Godzilla: Final Wars.

One of the most beloved entries among fans and critics and often a gateway to the franchise. Currently has a 89 percent out of nine reviews on Rotten Tomatoes.

Followed by Ghidorah, the Three-Headed Monster.