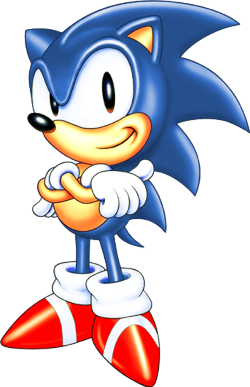 Sonic. The hedgehog that launched a thousand copyhogs.
"Being a role model is overrated. I'd much rather be... hilariously edgy!"
— Sonic the Hedgehog, Sonic Boom, "Role Models"

There was a time, largely in the mid-Nineties, when the world of video games was overrun with a certain type of character. The Mascot with Attitude is a snarky Funny Animal with kickin' powers, improbable jumping abilities, and usually some form of girlfriend or world to save (or something). Generally, the Mascot with Attitude can be defined by the presence of three or more of the following traits:

During their heyday in the 90s, almost all Mascots with Attitude were created in order to capitalize on the success of one Sonic the Hedgehog. The reason that most of these failed is that they tended to come across as The Theme Park Version of Sonic. Often a mascot with attitude would have said attitude at the expense of a real personality; they were frequently unable to say anything not snarky, and tended to overuse their gimmicks to the point of being Flat Characters. Many were American-made (probably because Americans love Sonic) and thus also tended to be filled with Looney Tunes-esque gags or grossout humor, as were popular in America at the time (Sonic himself notably had neither of these things in his games, though the American cartoon Adventures of Sonic the Hedgehog included Looney Tunes-style slapstick).

Nowadays, outside of Sonic, this trope (and advertising mascots not targeted to children in general) is all but discredited, except in parodies, with Conker's Bad Fur Day providing the final blow (although Conker's Bad Fur Day was more a parody of cutesy woodland animal cartoons/games in general). But it's not all bad—for every weak Sonic ripoff out there, there were always a few Mascots with Attitude who managed to be entertaining characters in their own right. The trick is to keep the attitude from eclipsing their entire character, and to merely make it one of their many traits. Audiences do still like "cool" characters, just so long as "cool" isn't all they are. Diversifying your gameplay doesn't hurt either, as many of the Mascots with Attitude that survived the '90s tended to play, er, radically different from Sonic.

Compare Dreamworks Face, a form of Covers Always Lie in which animated characters appear to be this but only on the movie poster.

Compare '90s Anti-Hero, who hails from the same era, and Overused Copycat Character.