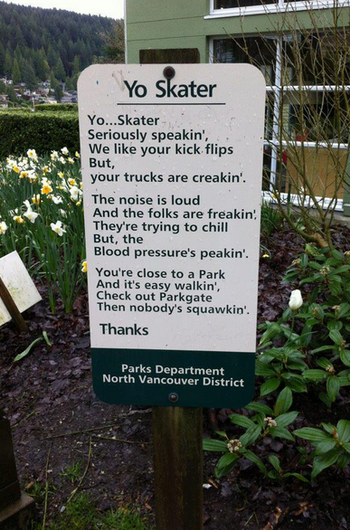 Yo, chillax with the slang, dude.
"Come on down to 'Bling Bling'! Market research said our name was cool!"
— Jewelry Store Radio Ad, Saints Row 2
Advertisement:

Yo, the kids love Descriptions of Totally Radical Here. They think it's bodacious.

Most television shows for audiences younger than 25 are written by people significantly older than the target demographic. On its own, this is all right. It is when these writers attempt to co-opt the culture of the younger generation that the trouble starts.

The biggest problem is slang. Either it's out of date (usually from the writers' own childhood), awkwardly misused (usually because the writers lack the proper understanding of the context and syntax), or just used far too frequently in the dialog (because they understand the meaning and syntax from a theoretical standpoint, but lack the understanding of the nuances of authentic contemporary youth dialogue). In more contemporary examples, expect similar misuse of emojis, ranging from awkward and unnecessary, to gratuitous overuse, all the way to completely inappropriate or badly misapplied usage (often with unintentionally hilarious results). Memes, when they are used, are also often some combination of outdated, awkwardly shoehorned, or badly misused, especially if they are either grossly out of date (e.g., advice animals, Doge/Grumpycat, or deep fried memes being used in the early 2020s) or used for purposes completely antithetical to their usual context. Whatever the case may be, there will be gnarly, bitchin' amounts of it, slathered over the dialogue like sauce over a particularly inept casserole.

Also problematic is what kids do in their leisure time. This can be particularly painful if they're attempting An Aesop about something that's recently become popular. Usually, that involves many stereotypical "bad boy" or "cool" activities, such as videogames, surfing, motorcycling, or fixing cars; a recent example would be grossly stereotypical "Sk8r Boiz" or Soundcloud rappers. However, even your standard episode won't probably show video games (for instance) as anything but the back of a TV with some Pac-Man-esque beeps and boops played over the soundtrack.

A major problem with this trope as a whole is that it plays into loose stereotypes that really don't apply to the majority of real life children or teenagers. While kids and (especially) teenagers may be more likely to give in to pop culture trends than adults, they too are individuals with their own unique tastes and preferences. Even the latest Teen Idol will likely only have a small fraction of real life teenagers as "hardcore fans", while the remaining 90% of teens will have opinions ranging from disdain to indifference to relatively casual fandom.

This also applies to commercials focused on kids, although they'll at least be knowledgeable about the product they're selling.

Of course, this can be done well. Most producers figure, though, that kids can't tell good writing from bad, and throw whatever out there. Because TV Never Lies, some impressionable viewers even believe it, resulting in Pretty Fly for a White Guy. Buffy Speak is a common way of avoiding this for those who do care. Another way to avoid the problem is to do it intentionally badly, though the line between this and Poe's Law or Parody Retcon is often nebulous, and if not done in a sufficiently obvious manner, expect people to accuse you of the latter if you try to defend it as a parody.

Don't forget, you copacetic hepcats, that if a show is trying to be set in a period older than the 80s, the same rules apply.

Shows on the Disney Channel, Nickelodeon, and Cartoon Network are known for doing this, despite most of them centering around tweens and teenagers. This is usually entwined with the overuse of far-past-neutered euphemisms, like "crud". Badbutt characters often speak this way.

A rich, deep well of Narm, especially when it's a Long Runner's obvious ploy to stay Relevant, Dammit. A lot of these examples also veer into So Bad, It's Good territory. A character like this may also be The Nicknamer. This character also tends to believe that Like Is, Like, a Comma.

See also Younger and Hipper, Jive Turkey (where a character pulls this off believably), Buffy Speak, Surfer Dude, Valley Girl, Leet Lingo, Xtreme Kool Letterz; this is also a common trait of the Mascot with Attitude and the Hippie Teacher. Often, this overlaps with Nostalgia Filter, as works that use this trope typically give very idealized depictions of childhood. Speaking Like Totally Teen is a common In-Universe mockery of this.

Contrast with Spock Speak, Keigo, Little Professor Dialog, and Neologism. Not to be confused with someone who is a total radical.

Principal Gibbons does "Undercover Principal Day" every year, posing as a teen to try and find out what the students are doing. He does a different persona every year; his previous personas include a goth kid named "Christian Devilbanes" and a cowboy named "Kip Willikers". This year he poses as a skater named Joey TicTac, trying to act hip by using outdated slang and references.

Example of:
Adults Dressed as Children

Principal Gibbons does "Undercover Principal Day" every year, posing as a teen to try and find out what the students are doing. He does a different persona every year; his previous personas include a goth kid named "Christian Devilbanes" and a cowboy named "Kip Willikers". This year he poses as a skater named Joey TicTac, trying to act hip by using outdated slang and references.