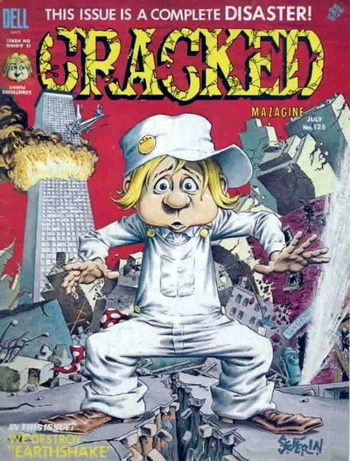 Before it became a humor website, Cracked was a magazine. Specifically, it was a knockoff of MAD (in their own words, their fanbase was "primarily comprised of people who got to the store after MAD sold out"), using a similar formula of movie and television parodies with deconstructive humor and otherwise (ostensibly) humorous articles, as well as its own Ugly Cute "mascot," Sylvester P. Smythe. It was by far the longest-surviving MAD knockoff, lasting in print form from 1958 until 2004, when a great deal of Executive Meddling reduced the mag to an erratic printing schedule and many of the original contributors left. For its last few issues, it was published by Rick Nielsen of Cheap Trick. Finally, it was Retooled as a "lad mag." This format didn't last long, and the magazine went under in 2007, only to re-establish itself as a website.

Tropes present in the original magazine: