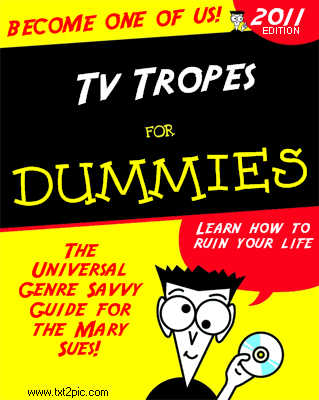 They really do have a book for everything, don't they?

Harmony: I'm not gonna make the same mistakes you did. I've been doing my homework, reading books and stuff.
Spike: What, Evil for Dummies?
— Buffy the Vampire Slayer, "Real Me"
Advertisement:

series of books is a popular way of learning just about anything, from C++ programming to Divorce Law to African-American History, achieved by simple explanations. They also provide a very useful quick reference for those already familiar with the subject.

As a result of their popularity, these books are often parodied, and fictional entries to the series are often conjured into existence. This is often done to show that a character knows next to nothing about a subject but is now trying to find out. They will occasionally be ludicrously specific to the task the character is attempting at the time.

Works created before the "For Dummies" series was started (or from authors or publishers who are wary of trademark laws) will use titles like "How to Do Tropes in N Easy Steps" or "You, Too, Can Trope!" or "Hey, You're not a Genius. Who Cares? Read This and You Won't Suck at X" or "Everything You Always Wanted to Know About Tropes But Were Afraid to Ask." Often, titles may parody the "Complete Idiot's Guide to _______" series as well.

Parodies often lean into the mildly Abusive Advertising connotations of calling one's readers "Dummies", showing a title that doubles down on it as in "[Subject] for Stupid Idiotic Morons" or the like.

Sister Trope to Correspondence Course and Specific Situation Books. Also compare Snowclone and The Joy of X, which lead to similar titling conventions. If it's bad enough that only a dummy would fail to realize how useless it is, it's a Faux-To Guide.