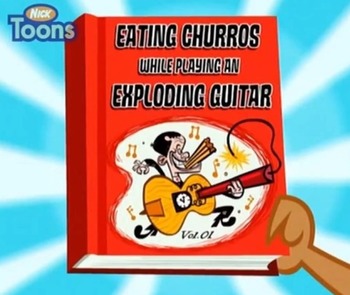 Volume 1… meaning that there's more of it.
Advertisement:

Our heroes are in quite a pickle: There's a specific problem that needs solving, but they don't quite have the knowledge or ability to do it. Just before they can start brainstorming a plan, cue some very appropriate help in the form of an awfully specific book about just the very situation they are stuck in.

Due to this trope's silly nature, it is usually restricted to cartoons and other works leaning towards the silly end of the Sliding Scale of Silliness vs. Seriousness. Furthermore, these books commonly have titles such as X for Dummies, How to X in 24 Hours, and so on.

Sister Trope to Parodies for Dummies. Compare to Great Big Book of Everything, which holds information about every specific situation rather than just a single one, Coincidental Broadcast, which pulls a similar effect with news stations, Oddly Specific Greeting Card, which does a similar joke with greeting cards, and One-Joke Fake Show where a show is based entirely around one simple, specific joke.