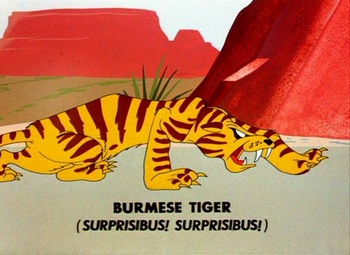 "Stop! Look! And Hasten!" was a 1954 Merrie Melodies cartoon directed by Chuck Jones and starring Wile E. Coyote and the Road Runner.

The Coyote is trudging down the usual open road in the desert Southwest, his hunger to the point that he snatches and eats a buzzing insect and starts chewing on an empty tin can. He is still chewing when he gets knocked into the air by the passing Road Runner. Watching the Road Runner put on his usual burst of speed for the getaway, the Coyote's eyes pop out of their sockets and land staring at his feet. Putting them back in and laying down on the road, he ponders his next play.

Said play includes a lanyard on a boulder, a lasso on the road, an open-road Pit Trap covered by a tarpaulin, an enormous pop-up metal slab with a crank, a Chase Scene on train tracks, a dynamite stack in a culvert, a motorcycle, a birdseed stop on a bridge (if you can believe it, his only date with gravity in the whole cartoon), and some – get this – Leg Muscle Vitamins (triple strength fortified, even). And of course, the Coyote continues to go nowhere in his pursuits, even though at the end he is doing it at double speed.