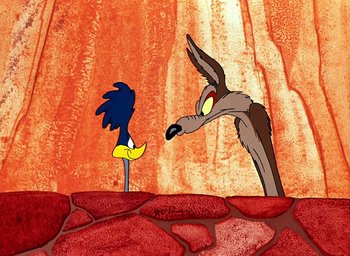 Zipping Along is a 1953 cartoon in the Merrie Melodies series, starring everyone's favorite desert duo, Wile E Coyote And The Roadrunner.

The Road Runner starts his day by running along a train and then onto the roads, with Wile E. Coyote spying on him and getting ready to capture him. However, when he goes down onto the road, he is run over repeatedly by his prey, and soon concocts some new plans like throwing a grenade, several mousetraps, dropping an atomic bomb from a kite, axing down a telephone pole, bird seed mixed with steel shot, hypnosis, a seesaw and rock contraption, a gun trap, severing a bridge on a cliff, firing himself from a cannon, a wrecking ball and finally, a doorway that activates TNT when opened.