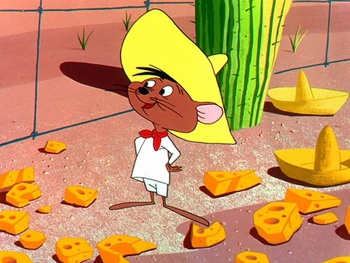 Speedy Gonzales is a 1955 Merrie Melodies cartoon starring the eponymous mouse. It was the debut of Speedynote a very different character called "Speedy Gonzalez" appeared in 1953 short Cat-Tails for Two, who would become a regular member of the Looney Tunes cast.

A group of Mexican mice stand at a fence on the border, gazing through the fence at the Ajax Cheese Factory on the American side. The hungry mice long for the cheese, but Sylvester the cat stands guard on the American side, eating every mouse that tries to sneak through. Finally the desperate mice appeal to Speedy, the fastest mouse in all of Mexico, asking him to get past Sylvester and get him the cheese.

Speedy Gonzales was directed by Friz Freleng. Even though Mexicans Love Speedy Gonzales, the perceived negative stereotyping of Mexicans have led to this and the other Speedy cartoons being shown less often than other Looney Tunes output.