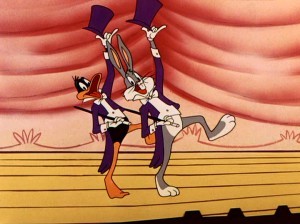 "Show Biz Bugs" is a 1957 Looney Tunes cartoon starring Daffy Duck and Bugs Bunny. In this short, Bugs and Daffy are costars in a stage show, but Bugs is getting top billing and all the applause, while Daffy gets (very distant!) second billing and complete indifference from the audience. Jealous, Daffy tries both one-upmanship and sabotage, until desperation drives him to blow himself up. (This finally works.)

Directed by Friz Freleng. A variation on the scene where Bugs and Daffy dance onstage was used as the opening credits for The Bugs Bunny Show, a Looney Tunes compilation show that aired on primetime and, later, Saturday mornings for nearly 40 years.

"If they like those tropes, they're starvin' for some real tropin'!"

Example of:
Saw a Woman in Half