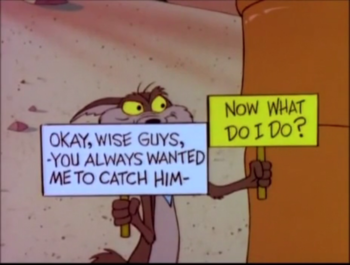 "Soup or Sonic" is a 1980 Merrie Melodies cartoon directed by Chuck Jones, starring Wile E. Coyote and the Road Runner. It was aired on May 21, 1980 as a part of the television special, Bugs Bunny's Bustin' Out All Over.

Wile E. Coyote's plans of the day include pole-vaulting, several attempts with a rocket, a safe dangling from a pulley, a firecracker in a frisbee and explosive tennis balls.

This short also has the distinction of being the one and only cartoon where Wile E. eventually catches the Road Runner... although the Road Runner is normal sized and poor Wile E. is tiny!

"Soup or Sonic" provides examples of: