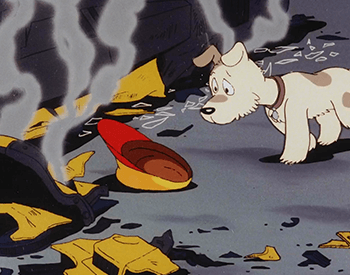 You can't just replace the life and love lost to tragedy like it were an old hat. ...Can you?
"Could you move his hat closer? ...His hat. The hat. People like to see a dead guy's hat."
— The Great Bernzini, The Public Eye
Advertisement:

When a character apparently ends up dead, there can be a shot of the lone Nice Hat (or other clothes or belongings) of theirs.

It may be used to obscure the character's potentially gruesome death. Some other times, however, it can also be used only to show that they Never Found the Body; the wearer may sooner or later show up, likely wondering why everyone is looking at their hat.

See also Empathy Doll Shot, Dead-Hand Shot and Hat Damage. Compare Empty Piles of Clothing, Smoldering Shoes and Alas, Poor Yorick. If a character gets eaten by something, this trope is typically paired with Spit Out a Shoe.