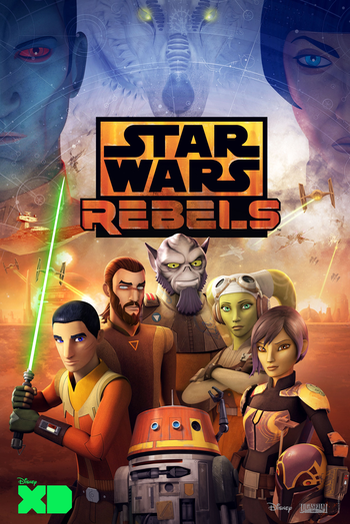 Destinies are revealed.Characters  From left to right: Ezra Bridger, Kanan Jarrus, Zeb Orrelios, Hera Syndulla, and Sabine Wren, with Chopper below.
"We have been called criminals, but we are not. We are rebels, fighting for the people. Fighting for you... I see what the Empire has done to your lives, your family, and your freedom. It's only gonna get worse. Unless we stand up and fight back. It won't be easy; there'll be loss, and sacrifice, but we can't back down just because we're afraid — that's when we need to stand the tallest. That's what my parents taught me. That's what my new family helped me remember. Stand up together, because that's when we're strongest: as one!"
— Ezra Bridger
Advertisement:

Star Wars Rebels is a CGI animated series set in the Star Wars franchise and a sequel to Star Wars: The Clone Wars, as well the first major Star Wars installment released following Disney's acquisition of Lucasfilm. It is created by Dave Filoni, who directed The Clone Wars, Simon Kinberg (X-Men: Days of Future Past) and Carrie Beck, and executive produced by Filoni, Kinberg and Greg Weisman (Gargoyles, The Spectacular Spider-Man, Young Justice).note Weisman later left the show after Season 1 to work on Rain Of The Ghosts, though returned for the tie-in comic Kanan.

Set fourteen years after Revenge of the Sith,note or about five years after Solo and before Rogue One and A New Hope the Galactic Empire is securing its grip on the galaxy and hunting down the last of the Jedi Knights. Young orphan Ezra Bridger (Taylor Gray) stumbles upon Kanan Jarrus (Freddie Prinze Jr.), a former Jedi who leads a Rebel group including Mandalorian warrior Sabine Wren (Tiya Sircar), Lasat strongman Zeb Orrelios (Steve Blum) and Twi'lek pilot Hera Syndulla (Vanessa Marshall) aboard the Ghost. As he joins up with them, Ezra learns the ways of the Force, and the Ghost crew fights alongside many allies against the ever growing threat of the Empire. Their journey takes them to many strange locales, and thanks to their stubborn belief in the power of hope, the Ghost crew becomes much more than they had ever dreamed of.

The series premiered on October 3, 2014 as a one-hour special on the Disney Channel and began airing regularly on Disney XD the same month. The show ran for four seasons and concluded on March 5, 2018.

Star Wars: Rebels is followed in production order by Resistance, the seventh season of The Clone Wars and The Bad Batch.

Please move any character tropes to the proper characters page and tropes associated with specific episodes and story arcs to the recap page.

open/close all folders
A-C
D-G
H-L
M-P
R-Z
"Remember, Ezra; without hope, we have nothing."
Feedback

The Same One We Used Before.

Kanan lampshades how their small Rebellion is able to continuously steal Imperial vessels so many times without being caught, or the Empire learning already from the previous attempts to try upgrading their security.

The Same One We Used Before.

Kanan lampshades how their small Rebellion is able to continuously steal Imperial vessels so many times without being caught, or the Empire learning already from the previous attempts to try upgrading their security.