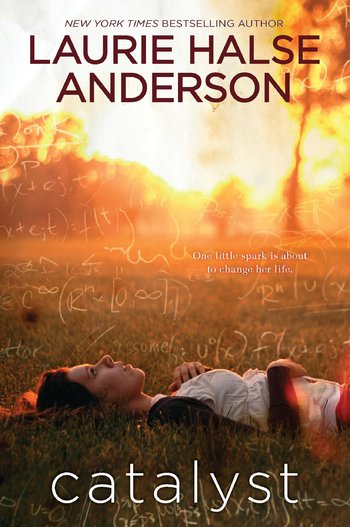 Catalyst is a 2002 novel by Laurie Halse Anderson. The story takes place in the same universe as Halse's acclaimed novel Speak, a year after the events of that novel, and focuses on senior Kate Malone as she makes plans for college.

Kate is a preacher's daughter who excels in chemistry and is a star track athlete, with her sights dead-set on getting into the Massachusetts Institute of Technology once she graduates from Merryweather High School. She's so determined, and so sure of her chances, in fact, that it's the only college she's applied to. Her getting rejected is just the tip of the iceberg, however, as soon afterwards a fire renders her neighbors - her abrasive school nemesis Teri Litch, Teri's mentally unstable mother, and her adorable toddler brother Mikey - homeless, and Kate's father arranges for Teri and Mikey to move in with his family. Kate must now struggle to deal with her rejection from MIT and a less-than-pleasant new roommate, all while maintaining her sanity.