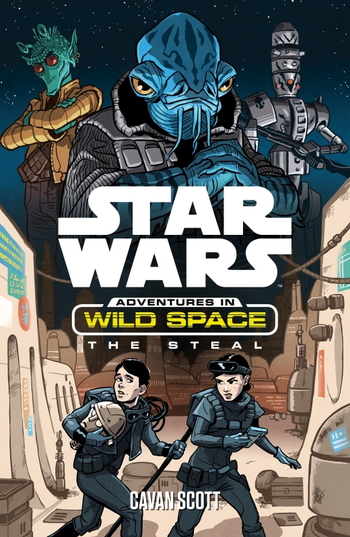 It is a time of darkness. With the end of the Clone Wars, and the destruction of the Jedi Order, the evil Emperor Palpatine rules the galaxy unopposed.

Far away, in the unknown regions of Wild Space beyond Imperial borders, MILO and LINA GRAF accompany their explorer parents on their expeditions.

As the Grafs scout a remote and unmapped swamp-world, the shadow of the Empire draws ever nearer...

Adventures In Wild Space is a series of Star Wars Expanded Universe children's novels by Cavan Scott and Tom Huddleston, focusing on the journey of two children, Milo and Lina Graf, through Wild Space, on the search for their parents, who have been taken captive by the recently established Galactic Empire to exploit their exploration and mapping skills.

The series is aimed towards younger kids, containing the typical galactic criminal scum such as bounty hunters and crime syndicates that the Graf siblings run into, as well as a few recanonizations of throwaway planets and terms previously used in Legends. The books are mostly isolated from other works in the Expanded Universe, leaving the date of occurrence for the events unknown, up until The Steal, which ties into the series by having the Graf siblings land on Lothal to meet the Bridgers.

The series received a distant sequel, the Tales from Wild Space short stories, in the Adventures comic series.