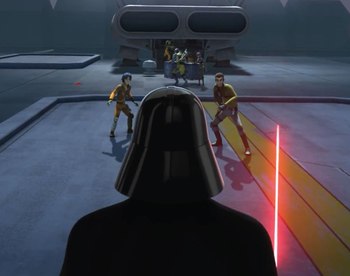 You can hear him breathing, right?
"If the rebels have left, then we must draw them back. And if they are here, we must draw them out. We will squeeze Lothal until someone reveals the whereabouts of these traitors."
— Darth Vader

The Ghost crew assists the Rebel cell led by Commander Sato and Ahsoka Tano, but set off on a solo mission when they receive a transmission from Maketh Tua, who intends to defect from the Empire. Meanwhile, Darth Vader and Agent Kallus crack down on all insurgency on the planet Lothal.