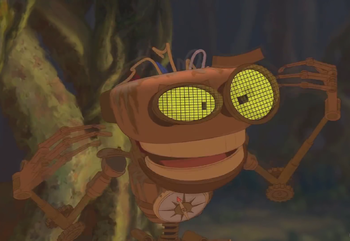 Maybe it's a protocol droid hardwired to be neurotic. Maybe it's a malfunctioning AI who happens to do a mean Shemp. Maybe it's got a few screws loose. However it happened, it's Exactly What It Says on the Tin (no pun intended).

In works of fiction, a robot can serve as comedy relief because of its basic inability to understand humanity, often Comically Missing the Point or taking things too literally. These fundamental misunderstandings can poke fun at the general incomprehensible nature of human interaction in the way only a true outsider can . . . or maybe it's just the funny voice, the clunky walk, or the random gizmos they can sometimes produce. Humor can also soften the risk of a Ridiculously Human Robot descending into the Uncanny Valley.

Often overlaps with Robot Buddy and Robot Clown, and can be a subtrope to Amusing Alien. Rarely has anything to do with Robot Chicken, although the show is funny and often involves robots.