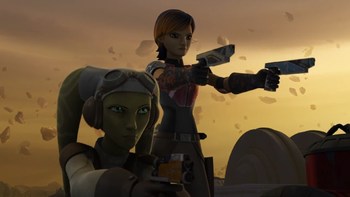 Sabine and Hera take drastic measures to keep George Lucas from altering the classic trilogy again.
Sabine: I want to believe we're doing good, making a difference. But sometimes it seems like the harder we fight, the harder things get out there. I feel like we can't take down the Empire on our own. That's why I need to know this isn't all for nothing. I need to know that I am not walking into another nightmare here.
Hera: What you need is faith; faith that there is a long-term plan that's bigger than you or me, bigger than Lothal, bigger than the entire Outer Rim. Have faith in that, and in us.

While out on what is supposed to be a fairly routine supply run, Hera and Sabine find themselves stranded on an old, abandoned Clone Wars-era Republic military base. Unfortunately, they are not alone, and they soon find out why the base was abandoned.