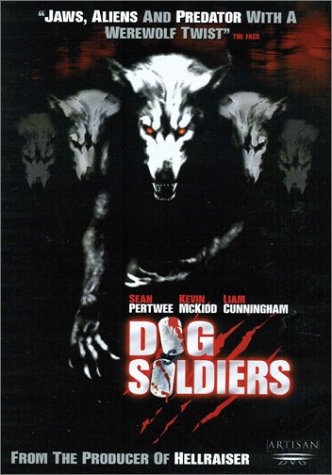 "So, if Little Red Riding Hood should show up with a bazooka and a bad attitude, I expect you to chin the bitch!"
— Sgt. Harry G. Wells, "Sarge"
Advertisement:

While on a routine training exercise in the Scottish highlands, a small group of British Army men discover the remains of an elite special forces squad that's been literally ripped to shreds. After being attacked by some unseen wild beasts, the remaining soldiers escape with the help of a female zoologist who just happened to be in the area. The rest of the movie deals with their attempts to survive the night in an abandoned house, be it fending off the werewolves or the internal strife.

Rumors of a sequel have been circulating for years since it was announced in 2004 that a sequel called Dog Soldiers: Fresh Meat was in the works. Additionally, a teaser for a prequel web-series entitled Dog Soldiers: Red was revealed in 2011. Very little is known about the status of either project, both of which seem to be stuck in Development Hell.