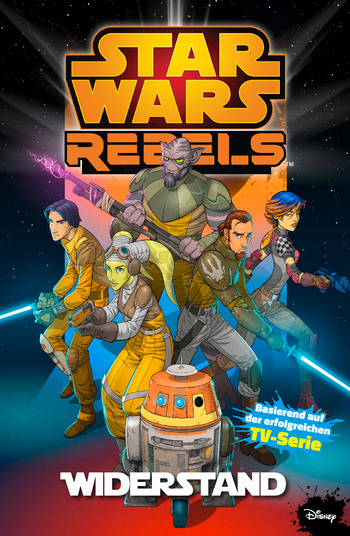 Based on the successful TV series.
(Volume 1: Resistance)
Advertisement:

The Star Wars Rebels Magazine was a magazine published by Titan Magazines (US), Egmont UK (UK), and Panini (mainland Europe). It featured known information about Star Wars Rebels, contained short comics featuring characters from the show, and gave out some details about them.

While the events of the comic are not essential to the show, they are indeed canon. Senator Nadea Tural would later appear in Star Wars (Marvel 2015), "The Thune Cargo" takes place on a world previously featured in Adventures in Wild Space, and so forth.

As of December 2016, the magazines are no longer being localized in America and Britain, instead being replaced with a new magazine series in 2017.

It is still being published in the rest of Europe, continuing into Season 3.

New issues are released every four weeks. Issues are later collected into volumes.