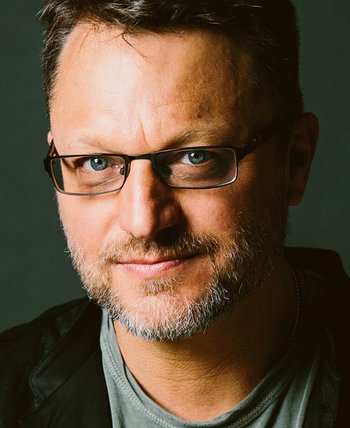 He is the solution.
"When you're in a room with Steve Blum, you often think you're on a Shakespearian stage."
— Peter Cullen in an interview at Comic-Con 2012

Steven Jay Blum (born April 29, 1960 in Santa Monica, California; pronounced "Bloom") is well known for his incredibly versatile range. He can play just about any role from heroes, to villains, even to the just plain weird. One of his most famous roles is Spike Spiegel from Cowboy Bebop. He is also known for working with Wendee Lee and Nolan North. He's equally known for having a ludicrous number of roles in the same work at times, with some video games having him voice so many extras that it seems as if you have stepped into some bizarre world populated almost entirely with Steve Blums.

He officially holds the Guinness World Record for being the most prolific video game voice actor,

having 261 credited appearances as of May 10, 2012. A few of the characters he has voiced are found here.

Notably he played a few characters in Warcraft III, and later played 3 of The Horde player races, as well as multiple NPCs, in World of Warcraft. note He did not reprise any of his roles from III, though archived recordings of Rexxar were used as his quotes for a while, and he did voice him in Heroes of the Storm.

In April and May of 2012, he used it to lead the charge to bring Toonami back on the air, which was announced as successful on May 16, 2012.

Steve has also previously voiced under pseudonyms such as David Lucas, Andrew Watton, and Daniel Andrews. However, due to union bylaws, he has stopped doing non-union voice work since 2005, but still continues to do union voice work in anime occasionally.

Steve has three boys and he mentioned in a 2015 interview

that one of them is doing voiceover work. He was married for a while, but has since divorced (though it was an amicable breakup) and is now in a relationship with—and, married to—Mary Elizabeth McGlynn.

No relation to Mark Blum.