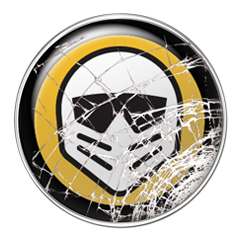 MotorStorm was Sony's other flagship racing video game series, developed by Evolution Studios. Basically, take Burnout and put it off-road. The series revolves around the fictional "MotorStorm Festival", an event that bears more similarity to Burning Man than to a professional racing league, going to various corners of the world to engage in extreme rally racing... but it's not like you really need to know that to get any enjoyment out of the game.

There has been five games in the series before it went dormant in 2012:

The games are also known for being rather difficult.