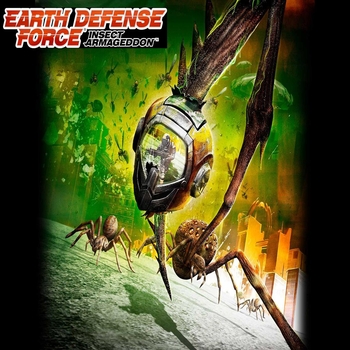 Developed by the American game studio Vicious Cycle Software and distributed by D3 Publisher. The game is available on the PS3, Xbox 360, and PC.

The game departs from the look of its predecessor but keeps the spirit of the game play, with updated graphics and effects. The developers worked with the original distributors, D3, to help keep the game in the spirit of it's predecessors. In addition, comments and opinions from the fan base were taken into the account and in many cases implemented into the game. More weapons, the return of a flight based armor, reloadable energy weapons, online and local co-op, and cheesy dialogue are some of the examples. You're still fighting over the top B-movie style enemies; they range from an assortment of giant bugs, giant cybernetic bugs, space ships, giant robots, and the usual alien flying craft.

Unlike the previous game with multitude of short missions with several difficulty levels, the game consists of three chapters with five missions each, and has three difficulty modes: Normal, Hard, and Inferno. Each mission takes place in a themed area in the city of New Detroit, is longer than those in the previous games, and players can repeat them to level up, earn credits and earn more weapons. Once the game is beaten, Remix mode and the ability to turn off the AI are unlocked. In Remix mode the game uses a different set of enemy spawn settings for each mission, such as replacing all Hectors with Mantises.

The number of weapons is over 300, divided into six types (Assault Rifle, Grenade Launcher, Missile Launcher, Rocket Launcher, Shotgun and Sniper Rifle); each gun has a level (tier) and armor class requirement.

There are now four different playable armor classes, which the player must be level up separately if they want to use all the weapons the game has.

Each armor class is improved by finishing missions with it. There are eight total armor levels. Normal difficulty allows unlocking up to Level 5, Hard allows you to level up as far as Level 7, and Inferno Mode must be risked to achieve Level 8. Upgraded armors gain access to more powerful equipment, improved abilities, health, and other perks.

There are two ways to acquire weapons. One way is to simply level up, as each new level rewards the player with a few weapons of the appropriate tier. However, these weapon must be 'purchased' using 'credits' earned by finishing missions. The other way is to kill mini-bosses, which have a chance to drop weapons (of a random tier and armor class, regardless of it having been dropped before). Weapons acquired this way doesn't cost credits to buy.