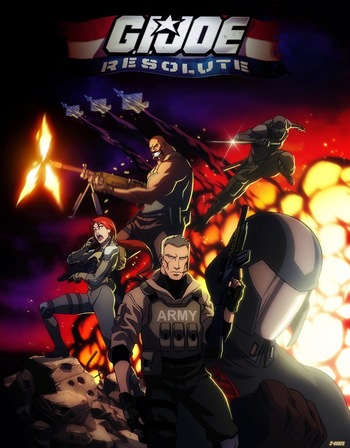 A Darker and Edgier G.I. Joe miniseries written by Warren Ellis and directed by Joaquim Dos Santos, G.I. Joe: Resolute was first released in 10 5-minute installments on the Adult Swim website before finally airing on the channel itself, along with the 10-minute finale, on April 26, 2009. As of January 1st, 2022, the movie is available online at the official G.I. Joe YouTube channel here.

In Washington, D.C., Major Bludd is found dead at the Lincoln Memorial, his corpse left there as a warning to would-be Cobra traitors. In Alaska, Destro and the Baroness seize control of the HAARP array, using it to superheat the ionosphere and disrupt global communications. Somewhere in the Pacific, the G.I. Joe aircraft carrier USS Flagg is nearly sunk due to a sabotage attempt by Storm Shadow. Meanwhile, at the United Nations headquarters in New York City, Cobra Commander addresses the delegates with an ultimatum: give Cobra control of the world within 24 hours or the organization will launch devastating attacks against civilian targets. As a show of force, the Commander has Moscow destroyed with a particle beam weapon, instantly killing 10 million people.

Struggling to recover from the attack on the Flagg, and with Snake Eyes leaving to fight Storm Shadow in Japan, the rest of the Joes launch a desperate counterattack, hoping to thwart Cobra's plans and defeat the terrorist group once and for all.

Made for an adult audience who grew up on the original TV cartoon, rather than the children the TV cartoon was aimed at, Resolute is notable for being far more violent and bloody than any G.I. Joe production preceding it, reflecting both the way the franchise had become in the comic books, and leading into the live-action films.

Cobra Commander annihilating Moscow and then killing one of his own men for trying to talk him out of murdering millions more.

Cobra Commander annihilating Moscow and then killing one of his own men for trying to talk him out of murdering millions more.