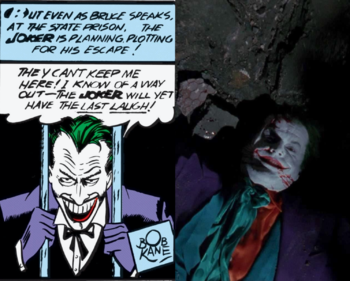 Joker Immunity — it's just been revoked.
"Mai never dies in the series, but evil always has to be punished in a movie."
— CinemaSins on Dragonball Evolution
Advertisement:

In the world of comics, no one is really dead, but in Hollywood, things work differently. In the end, there needs to be a climactic confrontation between hero and villain, and one of them will die. Guess who.

There are several reasons for this. Comic books have to come out on a monthly basis so they can't afford to lose villains (especially since popular comics can run for decades, and the publisher generally doesn't want to have to introduce a new batch of villains every few years to replace the killed off ones), whereas even the fastest movie productions take years, and are usually adapted from material that has an established Rogues Gallery; plenty more bad guys to choose from for the sequel. Also, the villain's death leaves the story at a natural conclusion, to the point that it's the standard ending for an action movie (which superhero films usually are).

Another reason for this is that it attracts big name actors to the films without any strings attached. Maybe big name actor Bob just wants a good paying gig without devoting the next ten years of his life to being in the same franchise. Maybe he already has another franchise and therefore can't commit to being in multiple movies but wants to work within the franchise or with the specific director. If you're a villain that will die anyway, things become less complicated.

Another issue are trademark rights. If a character is not used for a number of years, the trademark rights may expire and someone else may claim them. As comic books are published regularly, they don't want to lose the rights of their characters, and that means that any given one has to be used every now and then to prevent it. The film industry, on the other hand, is more used to release a film, perhaps some sequels if the film is successful enough, and then move on to some other story with a completely new set of characters; nobody may care if the trademark rights over some 1940s forgotten western have expired. And in the case of superheroes, it is not a problem for films anyway because they don't have the full rights, just a license, and comics still keep the trademark alive while a character takes a long absence from the screens. Comic books, however, have no safety net: if they cease to write about one of their characters forever, it is likely that nobody else will do so.

In movies with more than one supervillain, it's usually only the villain that acts as the Big Bad that perishes; the lesser ones either are captured, reform, or return as the Big Bad in the sequel. Usually a case of Self-Disposing Villain when the hero has a strict no-killing policy.

A Sub-Trope of Death by Adaptation. May be a form of Adaptational Karma. Contrast with Joker Immunity. This is liable to lead to He's Just Hiding! on the part of fans who like the character.

This is a DEATH TROPE! Unmarked spoilers ahoy.