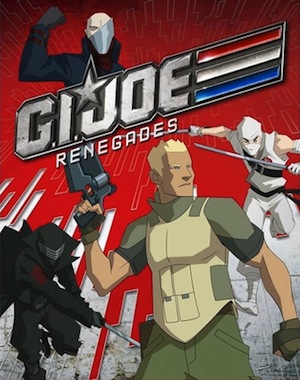 "Accused of a crime they didn't commit, a ragtag band of fugitives fights a covert battle to clear their names and expose the insidious enemy that is...Cobra. Some call them outlaws. Some call them heroes. But these determined men and women think of themselves only as ordinary Joes. And this is their story."
Advertisement:

The newest installment in Hasbro's on-going G.I. Joe franchise, G.I. Joe: Renegades is an Animated Series airing on The Hub. The show lasted for 26 episodes, running from November 2010 to July, 2011.

Renegades changes things up by having the team being wanted fugitives for destroying a Cobra Industries pharmaceutical plant. The truth of the matter is that counter-intel agent Shana "Scarlett" O'Hara recruited a small team of soldiers, Conrad "Duke" Hauser, Nicky "Tunnel Rat" Lee, Marvin "Roadblock" Hinton and Wallace "Ripcord" Weems (and Snake Eyes as backup) to infiltrate the plant. They found bio-weapon research going on, but were discovered by Cobra agents. The ensuing conflict resulted in the destruction of the plant and the evidence O'Hara was looking for.

They are now on the run from both the government and Cobra operatives, all the while trying to expose Cobra Industries for the terrorist organization it truly is, with a stolen heavily armored Cobra Industries truck as their only home. They're pursued by Duke's old rival, Dashiell Fairborne, aka "Flint", and Duke's old friend, Lady Jaye, who want to bring them in to face the consequences for their actions. Along the way they gather additional allies to combat Cobra and help people in need of their skills.

Full episodes of the show are released (although out of order) in the official G.I. Joe YouTube channel. Here's the playlist